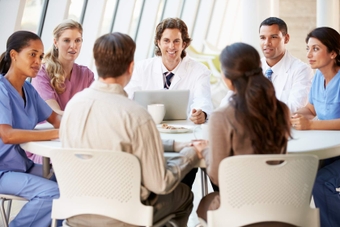 This simulation is available only
to members of CAN-Sim.

The patient is an elderly male who lives alone. He was admitted to the hospital after a fall. He awoke at night to prepare tea and fell injuring his right hip. He was unable to get up and remained on the floor for hours before being found by his daughter.

He developed a pressure sore on his sacrum. He has been diagnosed with cognitive impairment (early dementia), mobility and nutritional issues (recent weight loss). Although he is improving, his strength and energy have not returned to baseline.

During his time in the hospital, he has been having difficulty expressing his needs. He becomes increasingly agitated when attempting to communicate his needs. The family expressed concerns about his ability to function at home independently although he insists on being discharged to his house. In preparation for discharge, an Interprofessional Education (IPE) and patient/family meeting has been arranged.

This game focus on the assessment and treatment of an infant experiencing respiratory depression.

Excellence in simulation education and research through networking